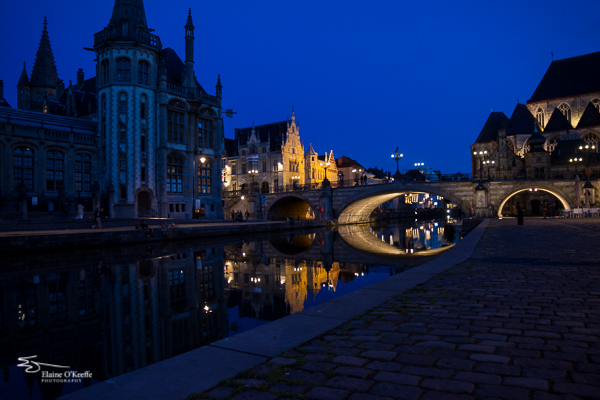 We travelled by train to Ghent, which was one of my favorite place on our trip. My cousins Monique and Annick were the most wonderful tour guides. We stayed in a hotel next to the canels. The old city center is only accessible by public transit, taxis and pedestrian traffic, this helps to preserve the area. In the heart of the city, you can see the three spires of St. Nicolas’s church, the Belfry and St. Bavo’s Cathedral. We toured the Dr. Guislain museum, which is next to the first mental healthcare institution in the world. They were hosting an “Outsider Art” exhibit and other exhibits of early medical equipment. Next we toured the STAM – Stadsmuseum and the Gravenstein castle.

My great-grandparents lived in some of the smaller towns near Ghent, such as Knesslaere and Aalter. We were fortunate to be able to drive to them and see the final resting place of my paternal great-grandfather who lived to the age of 105.  We ran out of time, so will have to explore more of my roots by making another visit to Belgium some day. A relief map of Ghent, which is in the STAM – Stadsmuseum The Graslei, one of the most scenic place in Ghent’s old city center The three spires of St. Nicolas’s church, the Belfry and St. Bavo’s Church A replica of the Ghent Alter piece in St. Bavo’s One of the many bike racks in the city This young lady entertained us as she played the piano, which just happened to be on a sidewalk The canal at night, our hotel is the one with the flag in front Another view of the canal Facing the other direction St. Nicolas’s church with the Belfry next to it A home in Ghent An interesting doorway, possibly to a monastery A mural near the tram tracks, beatified by local graffiti artists A window reflecting the museum The door where guests leave their stickers as they exit A view of the city from the top of the castle A window in the castle Shoes on a power line in the city center Dried fruit in an outdoor market One of the many Belgium beers that we tasted Me with my cousins Monique and Annick, the best tour guides! Near our hotel in Ghent